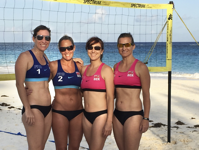 The Bermuda Volleyball Association has named their two women’s beach teams who will be representing Bermuda in the Beach Volleyball Continental Cup. The Continental Cup is the 2016 Olympic Qualifying tournament for beach volleyball and Bermuda is participating in the first round being held in Antigua from May 1-3. Bermuda will be represented by the teams of Lisa LeBlanc & Rebecca White and Stacey Dorush & Vikki Stevenson.

Bermuda will be facing off against teams from Anguilla, Antigua, BVI, Dominica, St. Martin, Grenada, Montserrat, St Kitts and St. Lucia. This marks the first time that Bermuda will be participating in Olympic Qualification for beach volleyball. There are 22 teams entered and the top 8 teams will move on to Round 2 of Olympic Qualifying.

Round 1 of the Men’s Olympic Qualifying tournament was held last week-end in Antigua.

Bermuda was represented by the two teams of Josh Malpas & Daniel Fiddick and Gary LeBlanc & Eric Haller. Round 1 was a big learning experience for the men’s beach program, finishing with a record of 1 win and 7 losses. This experience will help to prepare the men for this summer’s upcoming NatWest Island Games in Jersey and to build the National Beach Volleyball Program going forward for future years.